Direct esterification is the reaction between a carboxylic acid and an alcohol to produce an ester plus water as shown below equation. With PUREti titanates, esterification is conducted at 220˚C efficiently and catalyst is easily removed by water washing out.

In a trans-esterification reaction, a preformed ester exchanges alkoxy group with another alcohol to produce a new ester as below.

Polyesterification is an extension of either or both of the above reactions. Polyesters are produced by the interaction of a dibasic acid or its lower alkyl ester with a glycol or polyol, i.e. by direct or transesterification reactions.

PUREti titanates are neutral compounds and it is this neutrality that gives titanates many of their advantages over acidic and basic catalysts. Acids and bases cause side reactions and degradation of the reactants. This leads to poor color and contamination of both the product ester and any excess reactant. PUREti titanates minimize these side reactions. It is therefore possible to use larger excesses of reactant alcohols, which can be recycled without intermediate purification. This in turn leads to higher conversions and yields of purer products. Effluent treatment is minimized or eliminated.

Other metallo-organic catalysts are available, for example, certain derivatives of tin, magnesium and aluminum. However, it is usually found that these are either more prone than titanates to cause side reactions or are less cost-effective.

PUREti titanates are the most successful brand in plasticizer industries, but not limited to these. The ranges are also widely used in fatty ester, polyester polyol, polyester including PET and PBT, and polyolefin industries around the world.

The power of graphical messages is more than people could think of when people standing in front of the shelves in the supermarkets or convenient stores. The packaged foods and PET bottle soft drinks are within reaching distance in everyone’s daily life.

What people do not know is that PUREti titanates help the color printing inks attached firmly on the plain OPP films. Think about what if no titanates, normally NC/PU or NC/PA inks will easily fall out from the substrates, not even to say the frozen food or cold drinks in the fridge which sustained at low temperature.

Look into the mechanism, alcohol will be evaporated during the heating process, PUREti titanium chelate will help linkage to substrate and resin. 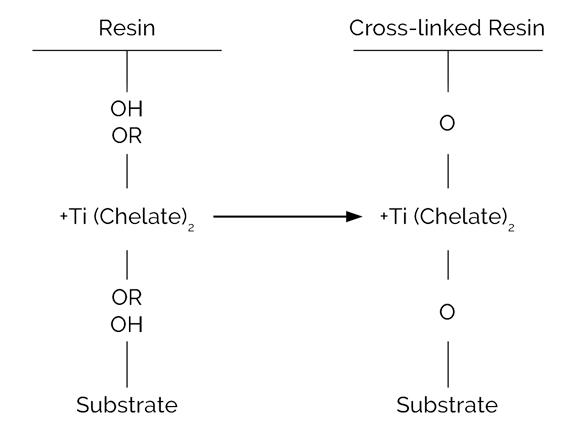 NC/PU or NC/PA film forming resins normally provide acceptable film strength after solvent evaporated. PUREti titanates will upgrade the solvent resistance or heat resistance to next level, therefore, graphical print can last during long term frozen environment. The substrate has to be corona treated till 38 dyne or above readily for printing.

PUREti TIC30 is the most successful item in printing ink industries, but not limited to this. PUREti TAA65 and PUREti TAA75 are widely used in non food packaging field of applications, such as money inks.
Polygel Organometallic’s CAB Catalyst is a blend of high-purity Vanadium Oxytrichloride and Titanium Tetrachloride which is used as a catalyst in polyethylene production.


Deprecated: Methods with the same name as their class will not be constructors in a future version of PHP; contact_usClass has a deprecated constructor in D:\INETPUB\VHOSTS\polygelglobal.net\httpdocs\includes\contact_usClass.php on line 2

Greetings from Polygel.
Thank you for writing to us.

Your enquiry has been recorded and forwarded ahead.